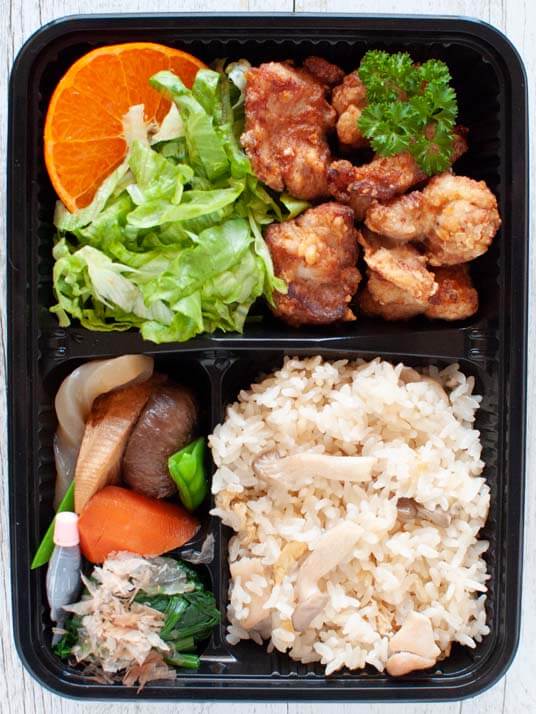 I re-posted the Karaage recipe with a video and updated blog contents last week, and you might be thinking of making karaage this week. Then you would want to take some leftovers for lunch the next day, wouldn’t you? So, here is the recipe for Bento Box – Karaage Bento!

Before getting into the details of how to pack Karaage Bento, I would like to introduce some of the bento boxes that you can buy.

A bento box doesn’t have to be fancy and it can well be a plastic Chinese take away container. But in Japan, people often have their own bento box and become attached to it. It’s a similar feeling to having your favourite coffee cup and using it every day.

I bought bento boxes occasionally when I went back to Japan and without realising, I collected few different kinds of Japanese bento boxes, as seen in the photos. You can purchase Japanese bento boxes online from Amazon, eBay and other online shops that sell homeware items. Here are some links.

If the Japanese discount store Daiso is near your place, they might sell bento boxes, too. The blue bento box in the photo below is the one that I bought from Daiso and it was only $4!

I also purchased a pack of disposable bento boxes that are often used by Japanese take away shops (bottom photo below). The dimensions are about 23cm x 17cm/9″ x 6¾” and the inside is partitioned into 4 sections. Either the largest or the 2nd largest section is filled with rice. You can buy them at kitchen supply shops. 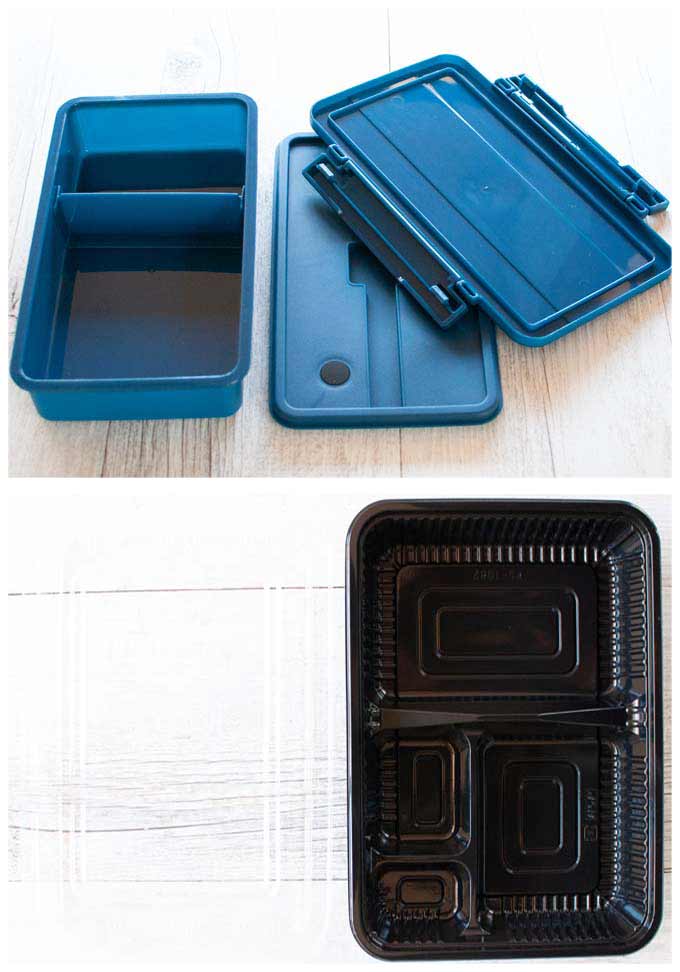 Ingredients for today’s Bento Box are listed below. I also added a note for variations. 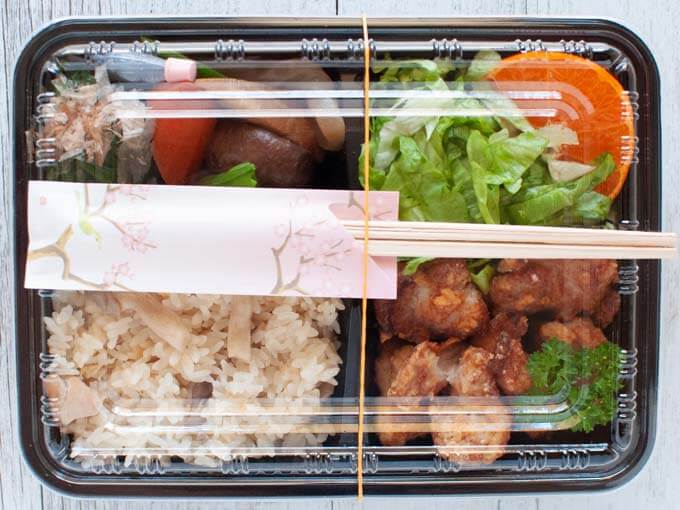 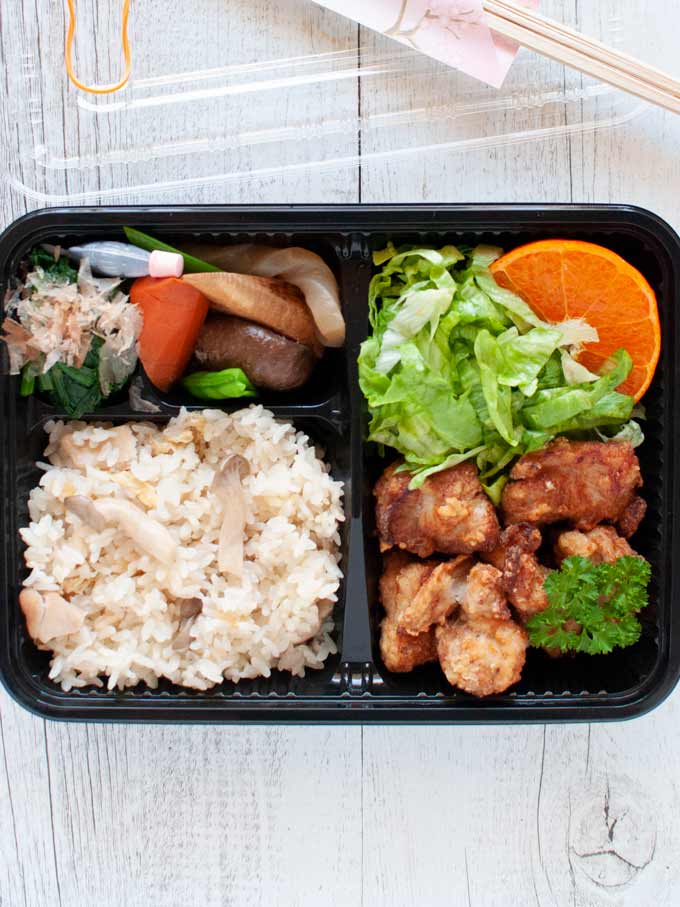 Karaage is one of those fried dishes that can be eaten at room temperature and is still delicious – perfect for a bento box!

I showed these photos of Karaage Bento to Nagi when she stayed the night at my place. As soon as she saw them, she begged me to make a Karaage Bento for her. She quoted that, unlike her brother who lives close to me, she didn’t have the opportunity to enjoy the bento when I made them for the post.

So, I ended up making a Karaage Bento again that looked exactly like the photo in this post. Nagi went back home the next morning with the Karaage Bento for lunch, and a big smile on her face. 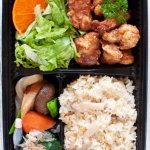 Bento Box with Karaage as a main is called Karaage Bento. It consists of cooked rice, karaage (Japanese fried chicken) and a small amount of a few side dishes. It is intended to be eaten at room temperature. I used a disposable plastic take away container that is partitioned. In this recipe, you will find how I packed the partitioned box and instructions to pack foods without partitions.

Because bento is usually made mostly from left-over dishes or make-ahead dishes, the time indicated in this recipe only shows the time to pack the bento box.

1. It is best to pack cooked Shimeji Gohan in a bento box while hot or warm as it is easier to shape the rice into the bento box.

Instead of Shimeji Gohan, you can have other mixed rice such as Rice with White Radish. Plain boiled rice is good too.

2. Try to pick different kinds of vegetables from Chikuzenni and pack them in the bento box.

3. Depending on the size of Karaage Chicken pieces, the total number of pieces that can fit in the space varies. In this bento box, I packed 5 pieces of Karaage Chicken, which is equivalent to about 170g of fresh chicken.

4. In this bento box, I could only fit in a quarter of a mandarin. You can use other fruits as long as they do not get squashed easily. Baby tomatoes are good as well.

5. This is exactly the same soy sauce container as those you get with take away sushi rolls. You can buy small containers at Japanese grocery stores or the Japanese discount shop Daiso. But you can use any small container to keep soy sauce.

6. If you are packing food in a bento box that is not partitioned, I would suggest that you place Chikuzenni in a mini foil cupcake liner as a tiny amount of sauce from the vegetables might spoil the spinach and rice. For the Love of Food, Feed Everyone! – Bentgo

Not Just for Tuesday! – Bentgo